British English vs American English: Which One is Better? 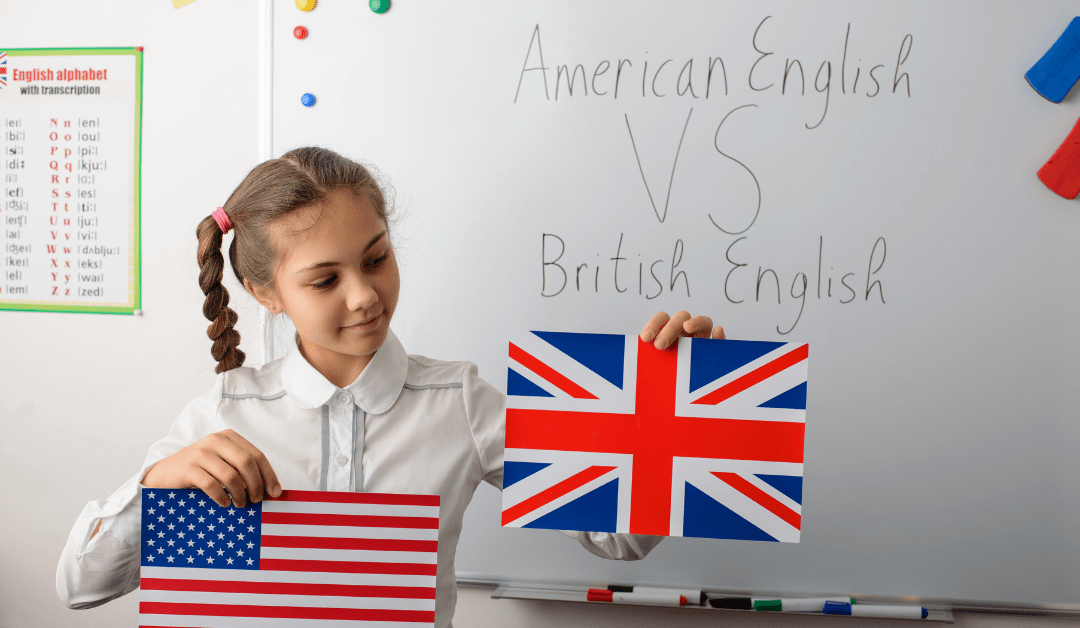 Did you know that English is the official language of sixty-seven countries? Each country has its own accent and popular sayings.

Even within the U.S., there are so many different accents. Americans in the South have a different accent than Americans living in California. Accents vary from country to country. The more popular accents are British English and American English. What’s the difference and which one is the best one for your child to learn?

American and British English have more in common than not, but certain words are different. For example, those delicious, thin, fried potato strips sold in most fast-food restaurants are called “French fries” in American English and “chips” in British English.

“Chips” in American English means “a thin slice of food (typically potato) made crisp by being fried, baked, or dried and eaten as a snack.” But in British English, “chips” are the thin, fried potato strips sold in fast-food restaurants.

Even the way Americans and Brits pronounce certain words is a little different. The way “short a” is pronounced is the more obvious difference. Basil, that delicious herb popular in Italian food is pronounced “bay-zil” in American English and “bah-zil” in British English.

Confused? It’s ok! The differences aren’t that big of a deal and most English speakers can figure out what the meaning is even if they don’t use that word in their country.

British English vs American English: Which is Better For Your Child?

The answer is that American English and British English are both great. Choosing one over the other is a matter of personal preference. Some prefer an American accent because they grew up watching American movies and listening to American music. Some think British English sounds more proper and prefer that.

Neither accent is wrong and both have benefits. Pick which one you like more or which one is more convenient for your child to learn. Most non-native English-speaking children pick up their English accent based on their English teacher at school. If a teacher is British or studied British English, the student will begin using British English words and will have a British English accent. The same goes for when a child studies with an American teacher or an English teacher who studied American English.

That being said, it is not bad for a child to be exposed to both English and American accents. It will actually help with their fluency. Once they are able to form sentences and speak independently in either British English or American English, hearing both accents is good for them.

As an English teacher with an American accent, I have been told many times that I am easier to understand than British people. Since both accents are very popular and your child will eventually hear both as they grow older, getting them used to both accents is important for them so that they won’t feel confused hearing an accent that is different than the one they are used to.

So whether your child enjoys “crisps” or “French fries,” the most important thing is that they understand what those words mean and that they are having fun learning English!

Galaxy Kids Featured on Free Apps For Me: Fun and Enjoyable English Learning App for Kids

Thank you, Free Apps for Me for featuring us! Read the original article at: https://freeappsforme.com/learn-english-for-kids-by-galaxy-kids-app-review/. Correct speech is built from early childhood. Parents attempt to ensure that the child learns the language earlier. The Learn Chinese for kids by Galaxy Kids app will help you with this arduous task. This application was specially developed by […]

Galaxy Kids Featured on Android Apps for Me: More than 2,000 Educational Lessons, Games, and Songs

Thank you, Android Apps for Me for featuring us! Read the original article at: https://androidappsforme.com/galaxy-kids-english-learning-for-kids-app-review/. Do your children want to quickly learn English? In this case, we have to bring your attention to the excellent tool – Galaxy Kids app. So, what’s the major goal of this app? Galaxy Kids offers you a wide range […]

Thank you, Apps Like These for featuring us! Read the original article at: https://www.appslikethese.com/galaxy-kids-english-learning-for-kids-app-review/. If your children have difficulties while learning English, we would like to present to you an excellent solution – Galaxy Kids app. This tool is full of different involving lessons, so let’s find out why this app is so special! First […]